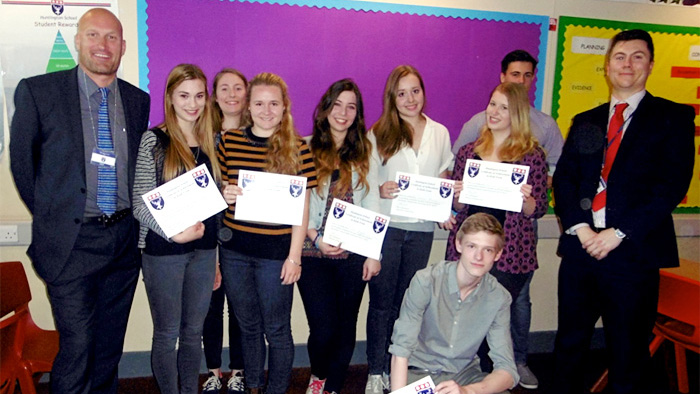 My year in York, England was much more than just studying in one of the best schools in the area. It was full of new experiences in different areas like people, school or hobbies.

I studied at Huntington School York which is a normal secondary school with a sixth form. My subjects were Maths, Physics, Geography and English Language. The reason why I have chosen these subjects is simple. I wanted to improve these subjects as a special training for my Abitur. I came here with a bad attitude about each of those subjects but my opinion got changed by all my good teachers and the different teaching methods over here.

My classes are all smaller than 15 students and we have two teachers in each subjects so we can practice each topic more intensively and for a longer time. This also means we have at least six hours of one subject every week. This gets extended by extra work or revision lessons. I was very disappointed that I did not have to wear a school uniform because they look really smart and represent the school but the Sixth Formers do not have to wear a uniform anymore!

The support for each student is much more than in German schools. Each student gets the opportunity to visit the Form Tutor or the different members of the Sixth Form Team but even the teachers offer you their free time to stay behind and do some additional work with them.

Some topics in my subjects are the same but some are also completely different. For example in Maths we do statistics which is probability in more depth but Physics was mostly a revision for me which was very helpful as I had big knowledge gaps in Physics.

School was a big part of my time as I had to stay there for at least 7 hours every day but I also had a social life with the host family. I lived at a typical English host family with 3 grown up children who visited us every weekend. I was a part of the family and was invited to birthdays, christenings or weddings. Like any family member, I had to help in the house like washing the pots.

As my host father was a bit older (57) he asked me for some help in the allotment. I helped him and it was very interesting to learn words in a topic we would never learn in school. While I was living and speaking with them I learned a ‘Yorkshire dialect’ which is quite funny because all the English people can hear that you are German but I also now talk in ’Yorkshire!!’ I have to admit that the English food is much better than I thought and I really enjoy eating here. Especially ‘Yorkshire Puddings!!’

I got some new hobbies over here so I joined the ‘Church Lads’ and ‘Church Girls’ Brigade which is a kind of youth group headed by the Church of England. It is comparable to a marching band but with some Christian and social activities. We met every Friday and played games or just talked as a group about social and political topics. As the English are very proud of their country we had to wear uniforms which were navy blue and looked really smart.

I also joined a marching band which relates to the company I was already a member in. I learned to play a marching bass drum which is different to a normal bass drum like those in a drum kit. In the beginning I struggled with the marching and playing at the same time but after some parades I understood it and was able to do it. Together with the band I did things I have never dreamt of. We went to the National Arboretum and played there for the ‘National Remembrance’ week. It was amazing to see how proud the English are and that they try not to forget what soldiers in the past were fighting for. For me as a German student it was a unique experience as no hate or anger was visible against me or Germany. We also went to the National Band Competition where we competed against bands from all over England and in the end the Royal Marines played a show for us. All these talented people and the music was great as we won the competition and we are the supreme champions now. I am very proud to say, that I am the first German who ever won this competition.! Overall I travelled through whole England with the band and played at different places for different occasions.

In the beginning of my stay, I was worried about meeting new people and making new friends. It took a while because I was very shy but the English teens are all very open-minded and included me in their groups. In my first 4 weeks I went to 3 different parties with different people.

I made new friends in all of the different environments I found myself in such a school or outside school. The school is open until 5.00pm and after this we have to study at home but I always found time to go out for a ride or to meet friends in town.

I had lots of good experiences with my new friends. I walked from York to Whitby which took us 16 hours pure walking but as we were 4 people it was nice and the time went past quickly. We had a camp out on an old airfield abounded after WW2 and had a barbeque. Little trips like this and other city trips included me really well in the group and I found new friends I can share memories with. We all knew that we will separate after the year but we are still in contact and I will visit them as often as possible.

I can just say coming here was one of the best decisions I ever made and I would do it again! England is a beautiful country with great people and a very interesting history.

I can recommend going to England for a year or even two years to get out of the normal routine and to see different places and people.

Cheerio England and cheers for this great time!

I can recommend going to England for a year or even two years to get out of the normal routine and to see different places and people.